The #Hacker Novels by Sherry D. Ficklin have gotten a lot of attention since the first book Playing With Fire released in October. Clean Teen Publishing also announced the release of In Too Deep at the end of November. Now, we are excited to share the official cover reveal for Digital Horizon, the third book in the #Hacker Series that will release in February 2016. Take a look at this awesome new cover and leave us a line or two with your thoughts on it. Also, if you haven't started reading this young adult mystery series, you can start today with a free digital copy of Playing With Fire.

No spoilers here. If you wish to see the synopsis for Digital Horizon start click your mouse and start highlighting here:
One wants justice.

Still reeling from her devastating loss, Farris is barely holding it together when she’s approached by a covert government agency. The IDC is recruiting the best hackers in the country to form a team capable of tracking down and thwarting cyber terrorists. When they make her an offer she can’t refuse—a shot at catching the people responsible for the death of her father—she’s all in. But success will mean forging new alliances, betraying the people she loves, and trusting an old enemy. If she succeeds, she might finally get the closure she needs. If she fails, the digital world will crumble at her feet, putting thousands of lives at risk and exposing the world’s most dangerous secrets.

In the dark web, where anything can be bought and sold, this talented young hacker just might have to sell her soul to get what she’s after.

The question is, who’s buying?

End highlight. Did you see the text? 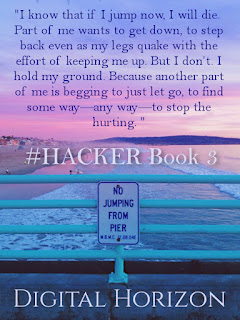 PLAYING WITH FIRE IS FREE!

One brilliant young hacker. One experimental government aircraft. One chance to keep it all from going up in flames.

Still recovering from her troubled past, Farris is no stranger to change. But when the military transfers her father across the country to an experimental aircraft squadron, settling in to a new life is the least of her problems. As a series of apparent computer glitches threaten the security of the fleet and the blame falls on her father, she decides to put her computer skills to use digging up the truth. Soon she's drawn into the perilous world of a hacker who is determined to ground the fleet—at any cost.

When all signs lead to someone close to her as the mastermind, Farris will have to burn more than bridges to get to the truth. She will have to risk her fragile new life to uncover the identity of the cyber criminal before they can escalate from harmless tampering… to all out murder.

Sherry is a full time writer from Colorado and the author of over a dozen novels for teens and young adults including the best selling Stolen Empire series. She can often be found browsing her local bookstore with a large white hot chocolate in one hand and a towering stack of books in the other. That is, unless she's on deadline at which time she, like the Loch Ness monster, is only seen in blurry photographs.

Sherry also writes New Adult fiction under the pen name Ranae Glass and is a contributing writer for fangirlish.com.