Mile 22 - WHAT WRITERS CAN LEARN FROM THE DUKES OF HAZZARD

The timeless popularity of The Dukes of Hazzard TV show provides a most excellent example of how the "suspension of disbelief" is an essential element of storytelling.  From 1979 to 1985, viewers waited eagerly to watch as, week after week, the Dukes escaped from yet another sticky situation.  The premise of all three cousins (Bo, Luke, and the beautiful Daisy) each having a separate set of dead parents, leading them to come and live with Uncle Jesse, really doesn't make much sense.  But it was accepted anyway, just because the show was so much fun.

Here's a few other stretches of the imagination that the audience willingly believed.

Let's face it, Daisy Duke was pretty amazing.  She could trick any bad guy with a bat of her pretty eyes, knew way more about cars than I ever will, and drove even better than them Duke boys--even Sheriff Rosco P. Coltrane thought so.  One time, as he chased who he thought were the Duke boys (but it was Daisy in disguise), he said, "It seems the Duke boys are driving a little better than usual."

One of the best lines in the show EVER.

And, if the rumors are true, she even made her own clothes.  :.)

Myth #2:  There are so many farm activities which require jeans but no shirt.

Seriously, this show used any opportunity to show off these guys' chests.  But who can blame them?  The eye candy was a big part of the show.  But when you think about it--if you're so friggin hot chopping wood that you have to take off your shirt, why are you wearing jeans?  Apparently the Duke boys were too poor to own any shorts... 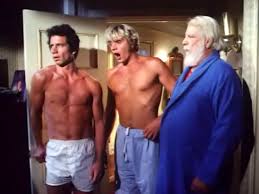 ...I guess Uncle Jesse used all their extra money to buy himself that nice robe.  :.)

And this, folks, is why people watched the show.  It used to be that exciting movies always had one car chase scene in them.  But The Dukes of Hazzard gave you that every single week.  In fact, The Dukes often had more than one car chase, car crash, or big jump per show.

The fast-paced show raced along at the speed of a car chase.  The likeable, attractive characters had you rooting for them every time.  Instead of lengthy dialogue, the punch lines came flying at you from left and right.  The show ended with a bang and a smile, and always left you wanting more.

This is what it means to please the audience, to be a success, to leave people waiting anxiously for your next episode...or book, to make this relevant to us writers.

Some folks make fun of this show, but I think we've all got something to learn from the... 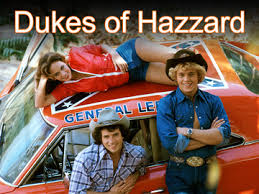 BTW, my kids would totally dig this set.  Anybody know where I could find one?