UNDER A BRASS MOON ANTHOLOGY

UNDER A BRASS MOON
A Steampunk and Science Fiction Anthology 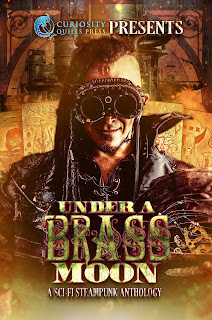 This anthology includes twenty-seven short stories intended to enchant.  Enjoy the works of Jordan Elizabeth, G. Miki Hayden, Benjamin Sperduto, D. J. Butler, Christine Baker, Lorna MacDonald Czarnota, Jessica Gunn, Lorna Marie Larson, Quinn Southwick, James Wymore, Terri Karsten, W. K. Pomeroy, Ashley Pasco, Jeremy Mortis, Grant Eagar, Amberle Husbands, Nick Lofthouse, Perry McDaid, and S.A. Larsen.
Here are just a few of the amazing stories you'll find in UNDER A BRASS MOON:
Maiden in the Clock Tower by Jordan Elizabeth: A young woman is trapped in a clock tower to be used as a pawn in an evil merchant's scheme. Can she escape to her true love?
The Queen of Cobwebs by Jeremy Mortis: Something is hunting people in the foggy streets, and the professor and his assistant are about to meet it.
Vacant by Nick Lofthouse: Where does a dreamer fit into a world where ideas are a finite resource from any one person? Could free thought be our savior, or just a sweet distraction from the inevitable?
Hour of Darkness by Ashley Pasco: Carissa Upton is just your average Victorian street urchin - little does she know that her life is about to change forever. Not only is her entire life a lie, but her future is uncertain.
A Connecticut Yankee in Queen Victoria’s Court by G. Miki Hayden: Engineering professor Dr. Alice Alante doesn't believe in time travel. But when she's sent to Queen Victoria's Windsor castle in a strange machine, her only choice may be to help build a dirigible to defend the crown.
Lucky Escape for Goldilocks Girl by Perry McDaid: On a new world structured to reprise all the patriarchal and elitist notions of the Elizabethan era, a young girl promised to an old but influential suitor chooses to rebel by masquerading as a Knight of the Road … or Highwayman.
Calliope by Terri Karsten: Roscoe Gordon dreams of bringing back his dad’s Steam Calliope, but he’s hindered by a pair of prank-loving ghosts. With their help, will he lead the parade or blow the whole thing up?
The Balloon Thief by Jessica Gunn: Adeline has made a name for herself as Beltham’s Balloon Thief for stealing high-priced jewelry items and leaving only a balloon in their place, setting sail for finer lands on her steam-powered hot air balloon. Adeline has been told the stolen rings and gems open a door on the mysterious Leikei, the temple in the air where she thinks her friend Colin is stranded. On her last robbery attempt, she’s arrested and forced to place her trust in the museum owner’s daughter who has her own reasons for wanting to get to Leikei. If she can trust her, Adeline just might be able to rescue Colin. If not, it might be the end for them all.
Ethereal Coil by S.A. Larsen: A new sin eater's refusal to do her job of keeping balance between good and evil awakens Wrath, one of the Seven Deadly Sins, endangering those closest to her.
Fritz Finkel and the Marvelous Mechanical Thing by Lorna MacDonald Czarnota: Every era has to begin sometime, and every inventor starts someplace. For Fritz, it is the opportunity to impress the "apple of his eye," the lovely, unobtainable Greta Spielmacher--the toymaker's daughter.  Fritz wants to be a toy designer, but he's the janitor. Will his special toy be the key to winning his lady love?

Henry the Tailor by Grant Eagar: Henry is a tailor and inventor of flying machines. Sophie is an agent for the English secret service. Henry and Sophie live in the alternate, steam powered world of Victorian England. The country is at war with Count Von-Friedrich and his horde of mercenaries. The spies of the count are killing and kidnapping the English scientists and inventors. Sophie’s job is to root out the spies and she uses Henry’s inventions as an enticement.

Talking Metal by W. K. Pomeroy: Five years after piloting a zeppelin to the other side of the world to find the spark, Saskia is on the verge of inventing greatness, but her old professor appears to have beaten her to the patent office, or has he?

The Women of Lastonia by Lorna Marie Larson: Earth's best team must learn why a distant planet won't join the Interstellar Alliance. Diplomacy is key, but the closed steampunk society has some primeval ideas on how to treat the fairer sex.

#
UNDER A BRASS MOON is available now from Curiosity Quills Press.  Grab your copy from Amazon and make sure to check out reviews on GoodReads.
Help us celebrate the release with the chance to win a $20 Amazon gift card.
All winners will be notified after verification of entry at the end of this promotion.  Prizes have been supplied by and the responsibility of delivery are solely that of the author and/or their representatives. Blogs are not liable for non-delivery on the part of the author. No purchase necessary.
a Rafflecopter giveaway

That's right. You heard it here.
How to Date Dead Guys is FREE for two days only (courtesy of my publisher, Curiosity Quills). 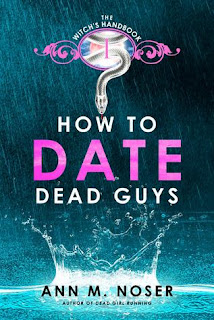 Grab it now from Amazon for #FREE!

This cover reveal is brought to you by YaReads Blog Tours and YA Interrobang!


Sixteen-year-old Jessa Stone is the most valuable citizen in Eden City. Her psychic abilities could lead to significant scientific discoveries, if only she’d let TechRA study her. But ten years ago, the scientists kidnapped and experimented on her, leading to severe ramifications for her sister, Callie. She’d much rather break into their labs and sabotage their research—starting with Tanner Callahan, budding scientist and the boy she loathes most at school.


The past isn’t what she assumed, though—and neither is Tanner. He’s not the arrogant jerk she thought he was. And his research opens the door to the possibility that Jessa can rectify a fatal mistake made ten years earlier. She’ll do anything to change the past and save her sister—even if it means teaming up with the enemy she swore to defeat.


Imagine a world where your destiny has already been decided…by your future self.

It’s Callie’s seventeenth birthday and, like everyone else, she’s eagerly awaiting her vision―a memory sent back in time to sculpt each citizen into the person they’re meant to be. A world-class swimmer. A renowned scientist.

Or in Callie’s case, a criminal.


In her vision, she sees herself murdering her gifted younger sister. Before she can process what it means, Callie is arrested and placed in Limbo―a prison for those destined to break the law. With the help of her childhood crush, Logan, a boy she hasn’t spoken to in five years, she escapes the hellish prison.

But on the run from her future, as well as the government, Callie sets in motion a chain of events that she hopes will change her fate. If not, she must figure out how to protect her sister from the biggest threat of all—Callie, herself.

Pintip is represented by literary agent Beth Miller of Writers House. Her debut novel, Forget Tomorrow, is a finalist in the Best First Book category of RWA’s RITA® contest. She is a member of Romance Writers of America, Washington Romance Writers, YARWA, and The Golden Network.
She lives with her husband and children in Maryland. You can learn more about Pintip and her books at www.pintipdunn.com

Runners & Riders
Companion to the Treasure Chronicles
A young adult novel of gangs and love in a steampunk world.

Juliet loved growing up at the seaside, although it meant lonely hours chasing after the other beach rats while her mother worked as a seamstress. Juliet never expected her seaman father to inherit a fortune and move the family to New Addison City. Suddenly her mother is a socialite and Juliet is best friends with a strong-willed girl who actually likes her. When Juliet’s new friend welcomes her to the Runners, a gang that has plagued the East Coast for years, Juliet sees it as the opportunity to fit in, learn tricks, and make eyes at one of the hottest members. What the gang does isn’t really wrong…right? She’s used to being a pawn for the Runners, but she starts to question what she sees as harmless fun when the gang uses her to attack a young officer.

Jonathan Montgomery vowed to end the Runners after they murdered his family. He joined the Riders, an elite police force dedicated to stopping the Runners’ crime spree. They have put him in New Addison City, but rookie mistakes follow Jonathan as he struggles to accomplish his goal, until a young woman feeds him inside information to bring down the Runners.

Between murders and secrets, Juliet will need to find her strength to help Jonathan, before the founder of the Runners crawls up from the sewers amongst her inventions to burn down the city.

RUNNERS & RIDERS will be available August 22 on Amazon from Curiosity Quills Press.

Check out early reviews on GoodReads!

This story takes place after BORN OF TREASURE, featuring new characters in exciting new settings.  TREASURE DARKLY, book 1 of the Treasure Chronicles, is on sale for July 11th and 12th for 99 cents!  Grab your copy now from Amazon. 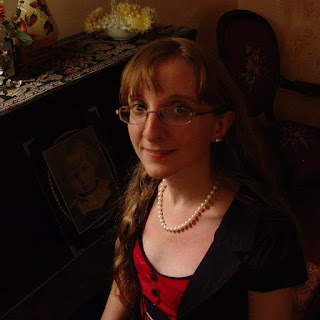 Author info:
Jordan Elizabeth became obsessed with steampunk while working at a Victorian Fair.  Since then, she’s read plenty of books and even organized a few steampunk outfits that she wears on a regular basis (unless that’s weird, in which case she only wears them within the sanctuary of her own home – not!). Jordan’s young adult novels include ESCAPE FROM WITCHWOOD HOLLOW, COGLING, TREASURE DARKLY, BORN OF TREASURE, GOAT CHILDREN, and VICTORIAN.  RUNNERS & RIDERS is her fifth novel with Curiosity Quills Press.  Check out her website for bonus scenes and contests.

In honor of RUNNERS & RIDERS, enter for a chance to win a $5 Amazon gift card so that you too can buy amazing steampunk paraphernalia!
Contest runs from July 11 to July 24.

All winners will be notified after verification of entry at the end of this promotion.  Prizes have been supplied by and the responsibility of delivery are solely that of the author and/or their representatives. Blogs are not liable for non-delivery on the part of the author. No purchase necessary. 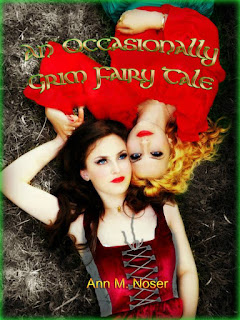 Thrilled to announce my beloved fairy tale will be available through Fantasy Works Publishing in early Fall 2016!

Click HERE for more info on the Desiderata series.