ENGAGED TO AN ALIEN POP STAR by Kendra L. Saunders 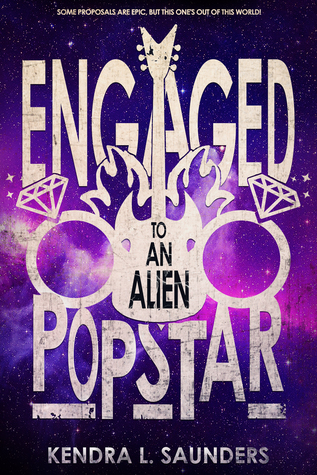 
Daisy Kirkwood and her best friend Kammie have adjusted to life on an alien planet pretty well, all things considered. And thanks to Daisy’s alien pop star boyfriend, Griffin Valentino, she has plenty of sexy new experiences to keep her busy. But it’s not possible to take a massive music nerd away from her home planet and not expect her to pine for a concert or a record store at least in once in a while.
Heading back to Earth with Griffin and his best friend Dev for a brief but much-needed visit, the girls want nothing more than to catch up on the underground music scene of New York City. Unfortunately, thanks to Griffin’s less-than-stellar space traveling skills, they accidentally pick up a hitchhiker. Or three hundred. Their many-legged stowaway beasties take up residence in the darkest, creepiest corners of Manhattan, leaving the gang no choice but to experience a very different underground than they bargained for.
Giant alien bugs aside, Griffin has some epic plans of his own for their trip, plans that involve a concert, an album… and the most outrageous marriage proposal that Earth has ever seen. 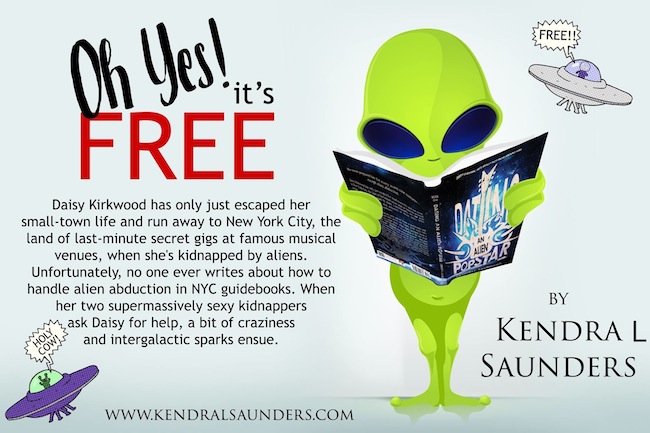 You can grab book 1 – Dating an Alien Pop Star – for FREE!

Amazon / Barnes & Noble / iBooks / Kobo
—
EXCERPT:
My boyfriend is levitating four inches above our bed, with a cloud of gold sparks floating around his head like a crown. This makes for a pretty normal morning, even with the soft snuffling and clicking noises he makes as he sleeps. And the crown is appropriate, since my boyfriend is an alien prince.
The alien prince in question, Griffin, floats back down to our bed with a yawn, stretching as he hits the blankets. He squirms around until he can slip under the blankets and wriggle closer to me. Despite sleeping uncovered, he’s toasty and warm, a sign of restorative sleep in his people. I return his embrace a bit too eagerly, my hands slipping under his nightshirt and causing him to gasp out loud. “Gods! Daisy, your hands are cold.”
“They’re not cold. They’re room temperature. But you feel nice and warm, so hold still.”
Griffin wriggles a bit more in feigned protest, but we soon settle into a comfortable position, arms and legs entwined.
“Are you excited to go back home?” Griffin asks, his voice husky with sleep as he leans up to nip at my earlobe with sharp teeth. His glowing blue eyes peer at me from under heavy lids and dark lashes, lashes that are unfairly longer than my own.
“If you keep biting my ear or looking at me like that, I’m not going to be able to go back to sleep. And yes. I’m very excited to go back to Earth.”

“Well then, don’t go back to sleep,” Griffin says, running a hand over his recently shorn dark hair. It’s always amazing to me how he can go from sleepy animal cute to dangerously sexy alien rock star in the span of seconds, depending on what he’s doing or saying. That kind of magical ability can get an Earth girl in trouble. “I have much better ideas for what we can do this morning, Wanda…”
Wanda is his pet name for me, a word in his language that means, “Love without end.” Griffin knows very well what he does to me when he calls me that.
“Do these plans involve you miraculously making chocolate appear? I miss chocolate,” I say, in a teasing tone. “When we go back to Earth, I’m going to stock up on junk food. There’s only so much healthy gray goop a girl can eat before she starts to feel like a very deprived post-divorce Gwyneth Paltrow.”
“Chocolate? Don’t be daft, Daisy, I was referring to sex.” 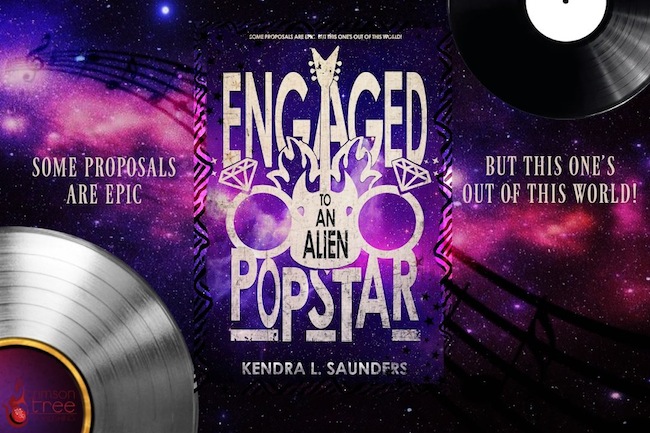 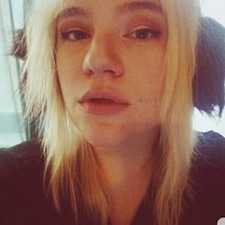 Author Bio:
Kendra L. Saunders is a time-and-space traveling fashionista author who writes books about magical, dark-haired men, interviews famous people, and suggests way too many bands to you via whatever social media platform she can get her hands on. She writes with good humor because humor is the best weapon for a girl who can't learn karate (or ballroom dancing).
She is the author of DATING AN ALIEN POP STAR, the magic realism novel INANIMATE OBJECTS, dark comedy DEATH AND MR. RIGHT, the upcoming romance THE UNLOVE SPELL, and has conducted interviews with NYT Bestselling author Jennifer L. Armentrout, goth rocker Aurelio Voltaire, and Project Runway winners Dmitry Sholokhov and Michelle Lesniak Franklin among many, many others.