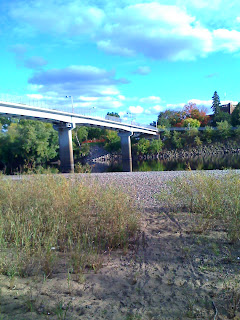 This spring, I joined Twitter. (My writing group is to blame. Haha.)  I've read (both in contests and writer blogs) that it's a good idea to include your query and first 250 words on your blog.


College sophomore Emma Roberts struggles to follow her mother’s sage advice: don’t sleep around, don’t burp in public, and don’t tell anyone you see ghosts. Even so, when she gets blamed for cute classmate Mike Carlson’s drowning, Emma turns to witchcraft and a mysterious Book of Shadows to bring him back. Under a Blood Moon, Emma lights candles, draws a pentacle on the campus bridge, and casts her spell:

“Oh moon, upon me shine—


Give back his life, instead take mine.


Send back his heart, return his breath.


Please release him from his death…”

The river rages up to claim her, but she escapes its fury. As she stumbles back to the dorm, a young man drags himself out of the waters and follows her home.

But it’s not Mike. Instead, Emma brings back other drowning victims from the dead: Sam—a pre-med student who jumped from the bridge, Steve—a young father determined to solve his own murder, and Jake—a frat boy Emma can’t stand…at first. As she delves deeper into the seductive Book of Shadows, her powers grow. But the river is stronger, reclaiming Sam and ripping Jake away just as her heart finally wakes up. Will witchcraft be enough to save her when she meets Steve’s killer? And will she ever see Mike again?

HOW TO DATE DEAD GUYS’ protagonist is a cross between Whoopi Goldberg’s psychic in Ghost and ’s transformation from bookworm to witch in Buffy the Vampire Slayer. Inspired by the controversial Smiley Face Murders theory, this book should appeal to paranormal fans of all ages.

For several years, I’ve written the monthly Pet Vet column for the Post Bulletin newspaper. Last fall, I published an article in RunMinnesota magazine. This spring, I have articles in both the DVM360 journal and The Wagazine.

I look forward to hearing from you,


Ann M. Noser (married name, non-veterinary publications)
FIRST 250 WORDS:
Dead people don’t scare me. At least, not as much as live ones do.
No ghostly apparition could ever intimidate me like the gum-smacking, hair-tossing leader of Saint Katherine’s Highschool of Hussies. She would even interrupt make-out sessions with her jock boyfriend to hurl insults in my direction.
“What are you staring at, loser? Are you jealous? Poor Emma, you’re so ugly and pathetic, no guy will ever want you!”
Now a sophomore at University of Wisconsin-Eau Claire, I still hear her jeering voice in my head. When someone tells you you’re worthless enough times, you start to believe it. That’s probably why I’m failing at my hopeful plans for college: to be happy, confident, and make loads of friends. Basic things that everyone else on campus can do with ease—like making small talk at keg parties—paralyze me with fear.
But when the ghosts speak, they don’t frighten me. I only worry what will happen if my mother finds out. So I keep my mouth shut. And I stay in my room.
Except tonight my roommate wants me to go to some hot guy’s cookout instead of spending the evening rereading Anne of Green Gables on my futon.
At home. Where I’m safe.
Where nothing bad can ever happen.
Unfortunately, my roommate never takes ‘no’ for an answer.
Ever.

- Thanks for reading and have a great day! (despite the snow that's coming if you live anywhere near Minnesota)
Posted by black cat at 7:28 AM