I don’t remember if there was any one event that got me into gaming. I was pretty small when the first computer (a Commodore Vic 20) came out. I couldn’t tell you if it was my idea (likely) to get it or my mother came up with it. Anyway, as you can imagine, games on that thing were pretty limited. Eventually at some point, I got a Vectrex for Christmas, which was a self-contained video game system with its own screen and vector graphics. Each game had plastic overlays for the screen to provide color. For a long time, I played games on the Commodore 64. At some point I had various Atari consoles the original NES, and eventually graduated to PC gaming exclusively. I’m still not much for consoles, and I can’t play a FPS to save my life with a controller… I need a mouse/keyboard. It wasn’t so much an “I’m going to get into gaming” moment, as it is something that’s always been around. 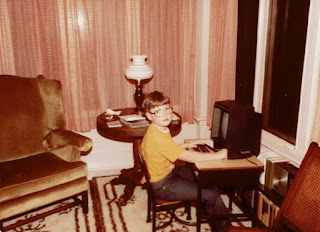 2)    Did you HATE it when your mother (or whoever) told you to stop playing and go outside? (because I do this to my son ON A DAILY BASIS)

I don’t remember my mother ever really trying to kick me off the video game and go outside. Probably because I went outside a reasonable amount of time on my own… and of course through the 1980s, video games weren’t what they are now. It might’ve been a different story if the games of my childhood were as involved and immersive as what’s out there now, but who knows.

Heh! This is a combination of having a lot of ideas, a fast typing speed, and having no other obligations on my time other than a day job and the occasional pause to sleep. I used to be addictive/obsessive about video games, and lately, I’ve been channeling that same energy toward writing.

Between video games (not so much lately) and writing, I haven’t watched much TV of any kind in at least 15 years. (Barring the occasional movie here and there.) I have fond memories of an ancient one called The Tomorrow People, which aired in the late 70s and early 80s that I watched as a kid. I remember some Benny Hill, and Black Adder as well… there was one British sitcom about IT workers that looked really good, but I only caught one episode.

5)    Please share a fun or favorite story about your cats, present or past. :)

The first cat I had, Murray, I got when I was 14. For as long as my friends knew him, whenever it was time to take him to the vet, I could carry him without a leash or carrier and he’d be calm as anything. I forget why I was away… I believe at college… (I’m bad with time stamps in my memory) anyway, I wasn’t there to take the cat to the vet. My mother asked one of my friends who still lived in the area to go to the house, pick up Murray, and take him to the vet. She would leave work later and pick Murray up from the vet.

Well… my friend RC found out the hard way that Murray only trusted me to carry him out of the house. To make matters worse, in an effort to be ‘helpful,’ my mother had leashed Murray to the kitchen table leg. The cat hated leashes. When RC got there, he found the kitchen table dragged all the way across the kitchen and wedged in the doorway, no sign of the cat, and a broken leash.
He spends about 20 minutes hunting around the house for the cat until he finds him and coaxes him out of his hiding spot. Murray is all purrs and smiles… until RC goes for the door out. Then, a declawed (not my idea, that was Mom) cat manages to get such a death grip on the doorjamb, RC (who is not a small guy) could not pry him off. Murray bites him, runs, and another 20 minute chase ensues. The runabout ends with Murray in his “safe warm place” aka, the litterbox.
This, at least, let RC corner him in the bathroom. He dumped out the clothes hamper and stuffed the cat in it before taping it shut and carrying the cat-in-the-hamper outside to his car.

At the vet’s, Murray is all calm and purrs.

He stopped by my mom’s work, walks in all disheveled with the hamper in tow, leaves it at her desk and says “Murray’s at the vet.” 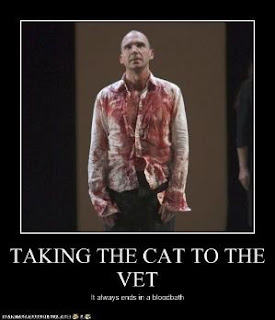 I dunno. Aside from Frozen, I haven’t seen one since I was small. Possibly the Black Cauldron, though I don’t clearly remember it beyond having liked it.

***I totally asked this question because I wondered if you watched Disney or not. I guess I called that one. hehe*** - Ann

Again, not sure here. I’ve had some of the songs from Aladdin spontaneously jump into my head and stay there. Also that song from Frozen spent a good long time stuck in my head.

4)    If you're willing to share--what was the worst date you ever endured?

Met someone online, she suggested a movie… we went to a theater, not much chemistry occurred. Parted ways in the parking lot.

Author Questions
1)    What event would you call your breakthrough as an author?

Depends on what you mean by breakthrough. Getting published? (I met AW Exley on an online chat room set up for people looking for advice on querying. Since my query was getting good feedback, but no agents were going for it, I asked her if she’d read some sample chapters of Division Zero. She did, liked it, and suggested I query her publisher (Curiosity Quills) directly. I did, and they seemed to have liked it. If you mean breakthrough as in being able to live off writing, that hasn’t happened yet.

2)    What do you know now that you wish you knew much earlier on as an author?

All the little minutiae about editing stuff. I’ve learned a lot over the course of a few short years.

3)    What's the best marketing advice you can give other authors?

Have famous relatives. Seriously though, I still feel clueless in regards to marketing. I’m not sure I’m qualified to dispense marketing advice yet. If I ever have a title go nuclear, I’ll revisit this question.

Neuromancer, Ready Player One, We’ll Remember for you Wholesale, James and the Giant Peach, The Andromeda Strain

I didn’t enjoy reading while I was a kid. Strange as that may seem now. I had a lot of resentment at things that were “required” to do, and the whole ‘summer reading list’ for school sucked all the joy out of reading for me. Being told I had to read immediately got the defenses up. If I have to do this, it must be boring or crappy, so I don’t want to. However, I have fond memories of reading Red Storm Rising, by Tom Clancy in 8th grade, as well as The Hobbit and Lord of the Rings. James and the Giant Peach is another one I remember liking. I had to read Fahrenheit 451 every damn year from 8th grade through senior year of high school… as if all the English teachers forgot that every other English teacher assigned it. Still, it was a good book. Somewhere in HS, I read Andromeda Strain for fun. But between video games and “school tells me I have to read so reading must = work/unpleasant,” I didn’t read many novels at that age.

***At the risk of sounding braggity-braggity about my son, he is now reading The Hobbit. I've promised to watch the movies with him once he's done. Now, I wish he'd hurry up, but he tends to read about 5 things at a time, so I'm in for a wait. (Plus, he's in third grade.)*** - Ann 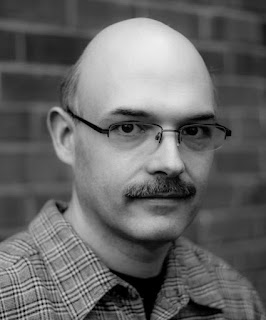 Born in a little town known as South Amboy NJ in 1973, Matthew has been creating science fiction and fantasy worlds for most of his reasoning life. Somewhere between fifteen to eighteen of them spent developing the world in which Division Zero, Virtual Immortality, and The Awakened Series take place.
Hobbies and Interests:
Matthew is an avid gamer, a recovered WoW addict, Gamemaster for two custom systems (Chronicles of Eldrinaath [Fantasy] and Divergent Fates [Sci Fi], and a fan of anime, British humour (deliberate), and intellectual science fiction that questions the nature of reality, life, and what happens after it. 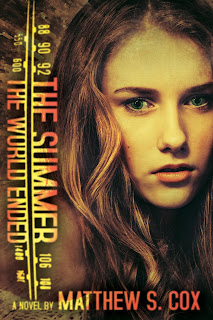 
As far as Riley McCullough is concerned, her best friend getting ‘dragged’ off to Puerto Vallarta for the first two weeks of summer vacation was the end of the world―at least until the bombs fell.
Life in suburban New Jersey with her mother has been comfortable, not to mention boring, to an introverted fourteen year old. As if her friend’s surprise trip wasn’t bad enough, her expectations for the ‘best summer ever’ disintegrate when she gets sent across the country to stay with a father she hasn’t seen in six years. Adjusting to a tiny, desert town where everyone stares at them like they don’t belong proves difficult, and leaves her feeling more isolated than ever. To make matters worse, her secretive father won’t tell the truth about why he left―or what he’s hiding.
Her luck takes an unexpected turn for the better when she meets a boy who shares her interest in video games and contempt for small town boredom. In him, she finds a kindred spirit who might just make the middle of nowhere tolerable.
Happiness is short lived; fleeing nuclear Armageddon, she takes shelter with her dad in an underground bunker he’d spent years preparing. After fourteen days without sun, Riley must overcome the sorrow of losing everything to save the one person she cares about most.
Posted by black cat at 5:59 PM