MY VERY OWN COVER REVEAL for AN OCCASIONALLY GRIM FAIRY TALE

Prince Bane Baronne has baby fever. He's in search of a wife with the proper mystical bloodline to bear him the heir of prophecy. Anna Leon is chosen, but Bane only pretends to be Prince Charming. When Anna questions his intentions, she vanishes from the castle.

Convinced she's to blame for her younger sister's disappearance, Maria Leon is coerced into the royal marriage instead. She's older, wiser, and should know better—but Bane always gets what he wants. And he's not above using trickery or treachery to do so.

Maria attempts to salvage what she can of a "happily ever after" by working hard to be the best mother and wife. Until the day she learns that every woman who has married into the Baronne line disappears soon after they've produced an heir.

And she's next in line.

Readers who enjoyed the combined wit of a large cast of characters in The Princess Bride and the not-so-happily-ever-after tone of Grimm’s Fairytales will relish this twisted take on Cinderella, to published with FANTASY WORKS PUBLISHING in 2016.

Inspiration for writing this novel came from:
1) the overwhelming protective mother bear mentality I developed as a first time mom

2) One of my favorite poems, Desiderata by Max Ehrmann, contains the line:
"The world is full of treachery..."

An Occasionally Grim Fairy Tale is chock full of such treachery. I can't wait to share it with the world. 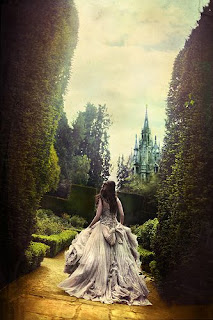